FACEBOOK PREFERRED BY YOUNGSTERS. OLDER LOT STILL PREFER “WORD OF MOUTH” AS THE MOST TRUSTED SOURCE OF MEDIUM

So, how much of a role does your social media presence play in influencing the purchase decisions of your potential customers? On the basis of Local Consumer Survey 2015 conducted by Bright Local, listed below are some actionable takeaways on the basis of their age group, thought pattern and how they react to these online reviews on local businesses as such.

The above-mentioned observations are pretty much consumer specific and can be utilized by the local businesses and the SEO’s to further improve the bottom-line of their business.

Segmenting your Consumer on the basis of their Age groups

In order to better understand the consumer’s needs, the study was further carried out by segmenting the consumer’s needs on the basis of their age group. The data was classified on three age group categories to see whether the young consumers form their opinion faster than their older compatriot, which is done as below

How much internet savvy your target audience is? 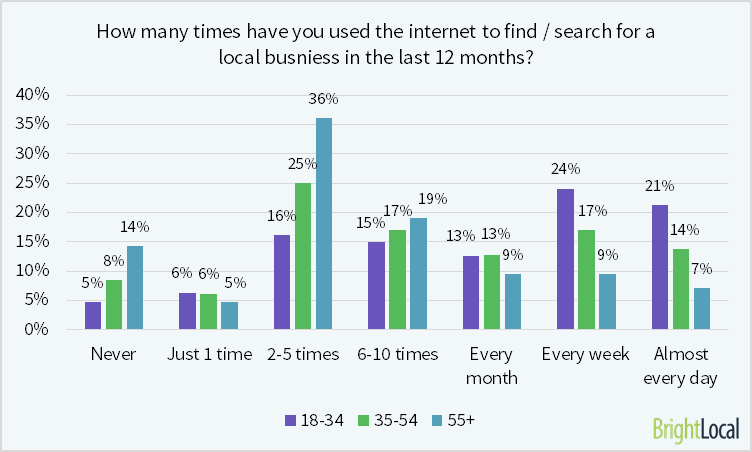 More than 55% of these online customers search at least once in a month, while more than 40% of searchers do it once in a week followed by a massive 21%, who do it on a daily basis.

So as a business owner or from your client perspective, it becomes all the more important for you to have strong online visibility across all the popular social channels.

Almost 50% of this age category can be found searching online anywhere between 1 to 10 times a year. They are behind their younger compatriots of 18-34 age group but still 31% remain active on a weekly basis.

The least active of the online searchers come from this age group, wherein half of them are active up to 5 times per year followed by less than 20% of folks, who do it only once or never on a yearly basis.

After knowing, which among the age groups are mostly seen browsing real time, it is still not clear whether they do study these online reviews or not.

How knowledgeable your target audience is about your local business’s online reviews? 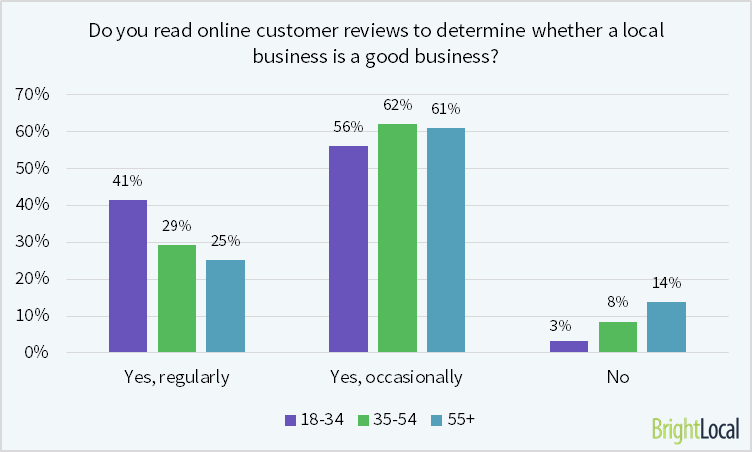 This brings us to the conclusion that more or less consumer of all ages study these reviews as such with the younger ones reviewing them a regular basis while more than 85% of the older age group(55 plus) frequently or occasionally studying them.

It’s a great news for all businesses alike, who are targeting all age groups to conclude that it’s highly likely that your potential customers will study these reviews.

Studying these business reviews is altogether a different thing, then knowing the fact that to which extent the consumer study these reviews and do they actually believe them.

What is your Target Audience’s preferred mode of communication or device to study local business’s online reviews? 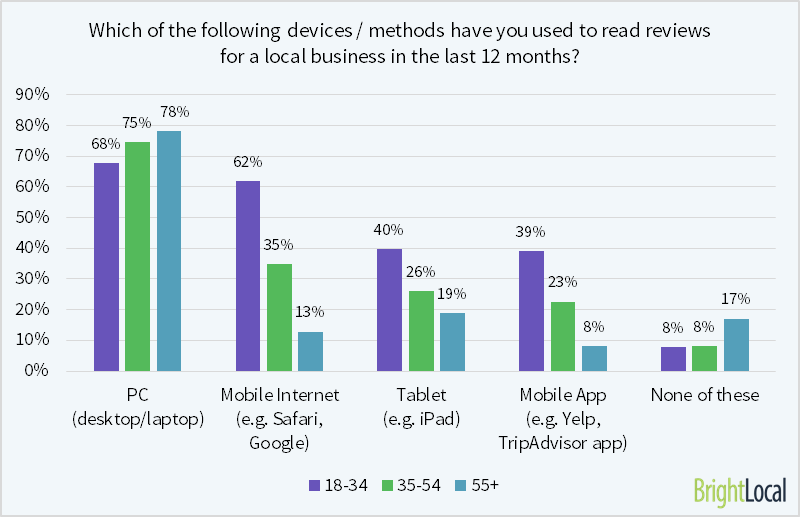 *NOTE: respondents were asked to select as many answers as they want

The difference in age group shows up in the above observations with the younger lot often seen to be active on their smart phones frequenting these reviews through the mobile browsers and apps.

On the basis of the preference of devices for the above-mentioned age group segments, we can make the following assumptions as below

It was observed through surveys that more than 70% of all consumers had studied these reviews on their PC (Desktop/ Laptop). This makes PC as the most inhabited medium, which is most frequented by the older lot than younger ones aged 18-34.

It was observed that more than 35% of the consumers preferred their mobile internet to study these online reviews.

The younger lot aged 18-34 were the regular online visitors in this category with 35-54 age group coming a near second position while the 55 plus age groups were the infrequent visitors of the lots.

Surprisingly, Amongst all the mobile device options, Tablets seems to grab the attention of the 55+ age group consumers. This is due to the fact that they seem to prefer larger screen size to search or research particular websites.

It also becomes evident from the fact that if given a choice they are more likely to pick up a tablet than a small screen mobile device.

What does your target audience prefer as the most trusted source of medium? 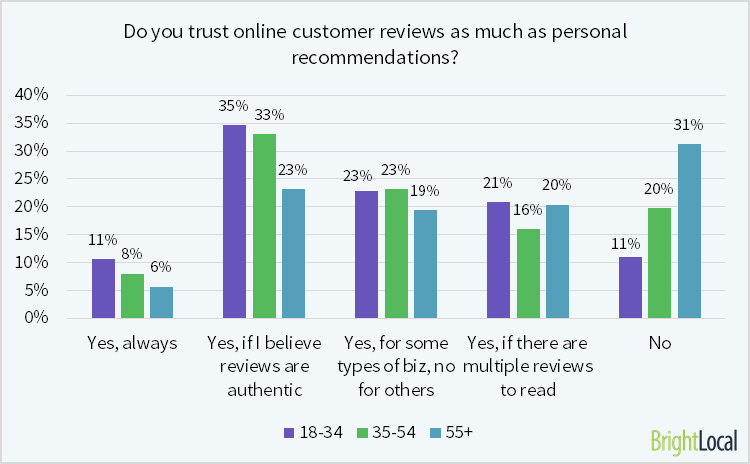 It was observed from the above surveys that around 80% give equal weightage to reviews and recommendations while more than 70% of consumers also agreed to follow the suit if it matches their requirements.

This brings us to the conclusion that there is certain correlation that exists between the age groups and the trusting levels of the respondents with the younger lot more likely to trust reviews as compared to the older ones.

Still that trust factor is hard to come with a large chunk of consumers pointing certain conditions to be met before they actually trust them completely.

How many online reviews does your target audience actually go through before making their decision? 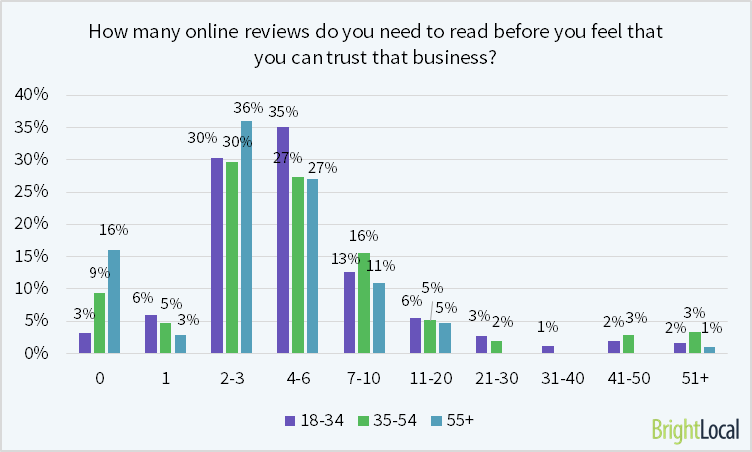 On the basis of the full survey report, it was observed that consumers are forming their opinion at a faster rate with more than 85% don’t go beyond the tenth review to make their final decision, which is irrespective of the age difference..

Moreover, a large percentile of 55 plus age group consumers don’t study any reviews since they aren’t active searchers.

The percentile of consumers studying 1-10 reviews is as below

Since consumers of all age groups form their opinion after going through a handful of reviews. This makes all the more important for businesses not only to have positive reviews on their sites but also update the new ones on a regular basis.

In past one year, through which medium your target audience have reviewed or recommended to the people, about the local businesses? 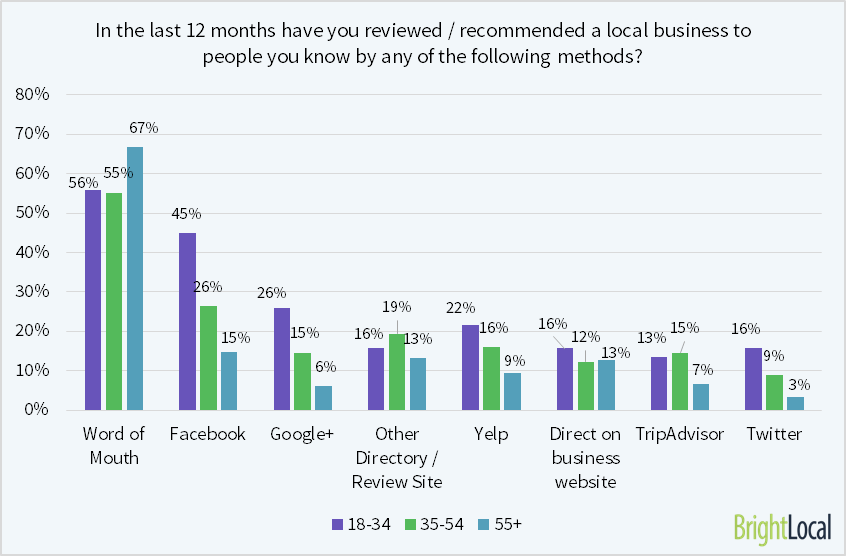 It was observed that more than 85% of 18-34 age group reviewed about local businesses through Facebook, Twitter or Google plus social media profiles. As compared to the half percentile of the 35-54 age group consumers with over 20% of the 55 plus age group leveraging their social media presence. This brings us to further conclusion that social media is more preferred medium for the younger lot of searchers with more than 65% of 55 plus age group prefer the informal medium of communication such as word of mouth. All in all, Facebook and the informal way communication are the two most preferred medium of communication with the ratio depending on the age group of consumers as such.

From our above observations, it can be concluded that consumers of all age groups will either review or refer local businesses largely on the basis of their age group and preferred mode of communication. But as a Business owner or SEO, you need to ensure maximum brand visibility across all the popular social media channels including Facebook, Twitter, Yelp, etc. and at the same time take care that they are creating a good first impression on your target consumer which is more than enough to take care of the bottom-line of your business.

Don’t want to be left behind? Check out our social media packages to give your business the lead among your competitors. You can also request a SMO Audit Report Worth $249 for FREE. Just email us at sales@ebrandz.com or call 1-888-545-0616 (Toll-Free) to get started.

Marketing Truths Revealed After the Pandemic